There may be many of you out there wondering why your TV reception has recently started playing up. The answer is likely to be interference caused by 4G mobile networks.

Since the 1st of January both Optus and Telstra launched 4G services in the 700 megahertz (MHz) frequency. The problem is that the 700 MHz frequency was previously used by television stations to emit analogue picture and sound and many of you have antennas and related equipment tuned to pick up this frequency.

You may find that your antenna has been overwhelmed by the strong 4G signals, particularly if you reside within close proximity to a mobile phone transmission tower. The result is poor TV reception.

An Optus representative has stated, “Optus is aware of some issues regarding TV reception … where Optus and/or Telstra has recently launched 4G services in the 700 MHz band”. Telstra has also been quoted as saying people living near mobile towers “may experience reception difficulties due to their TV receiver being overloaded by the signals from the base station”.

Andrew Parke, CEO of Jim’s Antennas, Australia’s largest free to air antenna installation company, had been following the impact that 4G has had on other countries around the world. The impact was considerable and as such, Andrew has worked closely with Jim’s Antennas preferred antenna suppliers, Matchmaster, Bitek, Radio Parts and Hills to identify methods to combat the problem.

Matchmaster, Bitek, Radio Parts and Hills now stock 4G ready antennas and amplifiers that should eliminate any interference caused by mobile phone tower transmissions. The addition of a filter to this equipment acts to block out the 4G interference and ensure crystal clear digital TV reception.

ANTENNA INTERFERENCE DUE TO MOBILE TOWERS ON NSW’S CENTRAL COAST

Are you putting up with poor TV reception and pixilation?  Rodney from Jim’s Antennas Wyong recently upgraded an antenna system for a home on the Central Coast due to his client’s  TV experiencing a poor signal connection.  Using his expertise as both a local of the area and an experienced antenna technician, it didn’t take […] 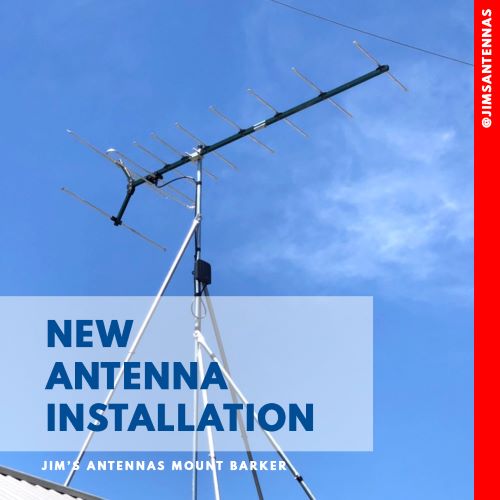 Jim’s Antennas Makes Sure Your TV Is Picture Perfect

Is your antenna falling apart and affecting the picture on your brand new TV? The tenants of this house had no signal and pixilating pictures on their TV.  Unsure what the problem was, they called Jim’s Antennas South Melbourne.  After inspection of the antenna, I saw that their antenna was old and falling apart. We installed a new digital […]